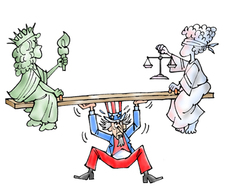 The course is divided into six major units:

Constitutional Underpinnings of United States Government:  The study of modern politics in the United States requires students to examine the kind of government established by the Constitution, paying particular attention to federalism, the separation of powers, and checks and balances. Understanding these developments involves both knowledge of the historical situation at the time of the Constitutional Convention and an awareness of the ideological and  philosophical traditions on which the framers drew. Such understanding addresses specific concerns of the framers: for example, why did Madison fear factions? What were the reasons for the swift adoption of the Bill of Rights? Familiarity with the United States Supreme Court’s interpretation of key provisions of the Constitution will aid student understanding of theoretical and practical features of federalism, separation of powers, and checks and balances. Students should be familiar with a variety of theoretical perspectives relating to the Constitution, such as democratic theory, theories of republican government, pluralism, and elitism.

Political Beliefs and Behaviors:   Individual citizens hold a variety of beliefs about their government, its leaders, and the U.S. political system in general; taken together, these beliefs form the foundation of U.S. political culture. It is important for students to understand how these beliefs are formed, how they evolve, and the processes by which they are transmitted. Students should know why U.S. citizens hold certain beliefs about politics, and how families, schools, and the media act to perpetuate or change these beliefs. Understanding the ways in which political culture affects and informs political participation is also critical. For example, students should know that individuals often engage in multiple forms of political participation, including voting, protest, and mass movements.

Political Parties, Interest Groups and Mass Media:   Students should understand the mechanisms that allow citizens to organize and communicate their interests and concerns. Among these are political parties, elections, political action committees (PACs), interest groups, and the mass media. Students should examine the significance of the historical evolution of the U.S. party system, the functions and structures of political parties, and the effects they have on

the political process. Examination of issues of party reform and of campaign strategies and financing in the electronic age provides students with important perspectives. A study of elections, election laws, and election systems on the national and state levels will help students understand the nature of both party and individual voting behavior. Treatment of the development and the role of PACs in elections and the ideological and demographic differences between the two major parties, as well as third parties, forms an important segment of this material.

Students must also consider the political roles played by a variety of lobbying and interest groups. Important features of this section of the course include an explanation for why some interests are represented by organized groups while others are not, and the consequences of this difference in representation. Students study what interest groups do, how they do it, and how this affects both the political process and public policy. Why are certain segments of the population able to exert pressure on political institutions and actors in order to obtain favorable policies?

The media are a major force in U.S. politics. Students are expected to understand the role of the media in the political system. In addition, the impact of the media on public opinion, voter perceptions, campaign strategies, electoral outcomes, agenda development, and the images of officials and candidates should be explored and understood by students. Understanding the often symbiotic and frequently conflictual relationship among candidates, elected officials, and the media is also important. Students should be aware of the goals and incentives of the media as an industry and how those goals influence the nature of news coverage. They should also understand the consequences of the increasing concentration of major media outlets in fewer hands, as well as the growing role of the Internet.

The Institutions of Government: Students must become familiar with the organization and powers, both formal and informal, of the major political institutions in the United States: the Congress, the presidency, the bureaucracy, and the federal courts. Students should understand that these are separate institutions sharing powers and the implications of that arrangement. The functions these institutions perform and do not perform, as well as the powers that they do and do not possess, are important. It is necessary for students to understand that power balances and relationships between these institutions may evolve gradually or change dramatically as a result of crises. Students are also expected to understand ties between the various branches of national government and political parties, interest groups, the media, and state and local governments. For example, a study of the conflicting interests and powers of the president and Congress may help explain repeated struggles to adopt a national budget.

Public Policy:  Public policy is the result of interactions and dynamics among actors, interests, institutions, and processes. The formation of policy agendas, the enactment of public policies by Congress and the President, and the implementation and interpretation of policies by the bureaucracy and the courts are all stages in the policy process with which students should be familiar. Students should also investigate policy networks and issue networks in the domestic and foreign policy areas. The study of these will give students a clear understanding of the impact of federalism, interest groups, parties, and elections on policy processes and policymaking in the federal context. Students should be familiar with major public policies.

Civil Liberties and Civil Rights:  An understanding of United States politics includes the study of the development of individual rights and liberties and their impact on citizens. Basic to this study is an analysis of the workings of the United States Supreme Court and familiarity with its most significant decisions. Students should examine judicial interpretations of various civil rights and liberties such as freedom of speech, assembly, and expression; the rights of the accused; and the rights of minority groups and women. For example, students should understand the legal, social, and political evolution following the Supreme Court’s decisions regarding racial segregation. Students should also be aware of how the Fourteenth Amendment and the doctrine of selective incorporation have been used to extend protection of rights and liberties. Finally, it is important that students be able to assess the strengths and weaknesses of Supreme Court decisions as tools of social change.

State and Local Government:   State and local government is not part of AP U.S. Government.  Nevertheless, students need to be aware of local and state governmental structure and institutions.